When a Character Class is not a Class, but is in Fact an Institution

When I was at school, I wanted to be an archaeologist like Indiana Jones. Sadly, things didn’t quite work out that way. It turned out there wasn’t much call for whip wielding tomb raiders in the wider world.

From childhood to adulthood, there felt like a trend in my career options - a move from the abstract to the specific. At childhood, “what you want to be” was a vague notion of what I liked doing. Career guidance at school presented general categories of job, becoming more specific career paths at college. Then "shit gets real" with an actual job – and it doesn’t get much more specific than that.

In RPGs, there seems a similar spectrum between the abstract and specific in “what you can be”. Classically though, there is a tendency to stop at the final stage - where a character class becomes a concrete role in the game world, rather than just a career guidance template. This post ties in with a collaborative project I am undertaking with Panic Pillow, where we attempt to represent the last bit in an RPG context.
From the Abstract to the Specific

In the original edition of D&D, classes began as extremely generic, almost more like a general category your character would fall into. Fighters were termed “Fighting Men”, with wizard and cleric the only other classes available. Future editions would see much greater diversification, and with correspondingly greater specificity. 3.5 edition D&D was a high point in terms of the multitude of class variants available in its expansion handbooks. Why just be a fighter, when you can be a Ruby Knight Vindicator?

5th edition D&D still has a lot of classes, especially including the options for pathway specialisation. But it’s some of the newer wave of OSR adjacent games that are taking this to a whole other level, with a proliferation of highly specific, flavourful classes with little relatability to the generic “Fighting Men” of OD&D.

Troika and the GLOG are two games that stand out in this respect. While the Numinous edition of Troika has just 36 different classes, these are highly quirky and specific compared to most RPGs.  Why be an assassin, when you can be a Journey Man of the Guild of Sharp Corners?  This approach inspired fans to make hundreds of variations in one Itch jam alone.  The GLOG community currently has 548 classes listed on their shared spreadsheet, not even including the wizards.
What I’ve noticed is a transition point at a certain level of specificity, where the fundamental nature of what a class is changes. A “fighter” is not too dissimilar to the type of the career templates my career counsellor gave me (if a bit more exciting). By the time you get to Ruby Knight Vindicator, this feels more like an actual job with an institution in the game world. Below I’ll look at two ways this transition can be managed.

There’s more than one way to deal with a large number of highly specific character classes. The Troika game has made its setting very big, encompassing a multitude of separate spheres. The make up of the average adventuring party is highly cosmopolitan, with characters potentially originating from far flung spheres. The key here seems flinging these spheres sufficiently far as to never need feature in game play.

An alternative approach is to root classes in the immediate geography and politics of the game play region.  This method seems to have been adopted by some in the GLOG community. The classes in Arnold Kemp’s original GLOG version actually started off as fairly generic and reasonable in number. But openning the pool of classes to the whole community saw an explosion in their diversity and specificity.
The full range of GLOG classes could be made available in one game, on a similar sphere-hopping basis to Troika. However, some have chosen to employ a restricted class list grounded in the context of a specific setting. Some of Arnold Kemp’s GLOG classes were designed with his Centerra setting in mind, even if they are open to others to use in other settings.

We enter the territory where class design equates to world building. The class itself necessitates specific institutions to exist in the game world, a specific order of paladins. Unlike with Troika, these institutions are quite likely to figure in game play, not being a relic of some distant part of the universe. We come to the point where the term “character class” perhaps becomes a misnomer.

This is an Institution, not a Character Class

Introducing exhibit A, the Knights of the Broken Sword.  This is ostensibly a GLOG class created on the Throne of Salt blog for use in their Shadow of the Eschaton setting.  But is it though?

My suggestion is that the Knights of the Broken Sword are not a class at all, but an institution in the game world that your character could join. On meeting the specified requirements, there is the opportunity to advance in rank within the order. As you advance, you will be furnished with abilities to enable you to better pursue the goals of the organisation.

The format in which this knightly order is presented is in keeping with that of other GLOG classes. It is also listed in the community’s class list. The main modification is a system of “faction progression”, meaning characters meet the order’s requirements to advance in rank. This is a feature I really like, drawn from the Degenesis RPG, that makes advancement conditional on serving an organisation’s agenda in the game (I’ve touched on this idea here).

It's notable that once a GLOG class is rooted in a setting, it’s a very small matter to convert it from a class into an institution. This almost happens naturally, when a class has been made very specific and flavourful. Were I to use GoblinPunch’s God Throat Paladin, I would probably run it using something very similar to factional progression. This would only require minor modification.

My own project is working in collaboration with Panic Pillow, where we have each produced 6 institutions for use in the same setting. These aren’t a million miles from GLOG classes, but the first page outlines the organisation you will be joining, rather than the fancy pants abilities you get. The first picture is the institution head quarters, rather than the hero you picture yourself as.

Panic Pillow has tailored a version to an FKR style of play, which you can download here. I’m working on a variation designed to work with Into the Odd and Cairn style auto damage games, which I’ll make available soon. 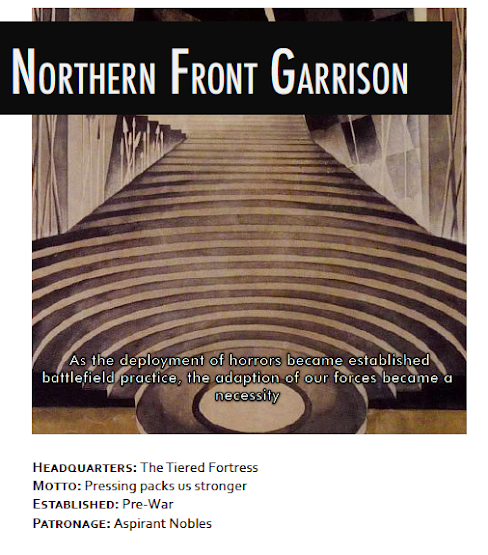 The institutions have a stipulation, which you need to follow to progress in the organisation. These are for the most part flavourful. The real implication of joining an institution is having to act in accordance with their agenda in the game.
We've deliberately not attempted to prescribe obligations of this sort in advance.  This is to contrast with the type of quests Paladins face in 1e AD&D, as a box to tick to achieve advancement.  It's too easy to skip over such requirements as something that took place in downtime.  The idea is instead to make this a fundamental part of gameplay, and a more constant influence on the type of adventure you go on.
Summary

Growing up, the transition from imagining “what I want to be” to having an actual job was a fairly depressing one. I'm hoping that won't be the case with our RPG.  I’ve nearly gotten through this post without using the word “materialist”.  But having the game world define your character through institutions fits very much with my goal to run a materialist game.

There are undoubted challenges to running an RPG where characters don’t always have free rein over the adventures they undertake, and must satisfy the agendas of disparate organisations. As I’ve mentioned before, there must be a way to play the game without aligning with any organisations (though with a downside). I’ll have suggestions for how this can be done in future posts.
on July 17, 2022
Email ThisBlogThis!Share to TwitterShare to FacebookShare to Pinterest 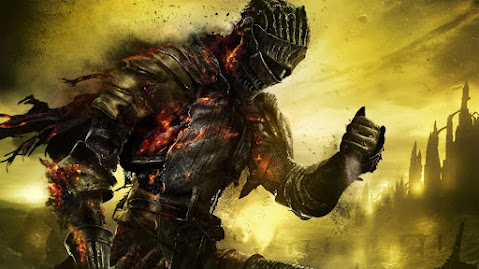